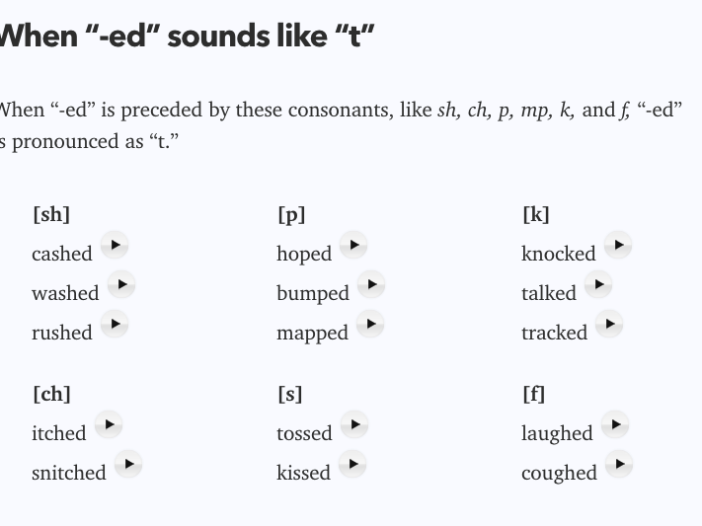 Wondering how to properly pronounce words with -ed endings? Then this post is for you!

Pronunciation might be one of the trickiest parts of learning English. Sometimes there are no strict rules, so you have to listen and memorize how some words are pronounced.

For words ending in “-ed”, there are some general rules you can follow.

Here's what you need to know.

In this example sentence, “hated” sounds like “hey-t'd.” How about this?

“He cashed the deposit.”

“-ed” ending in past tense verbs are usually pronounced as “d” or “t.” This depends on the consonant before the “-ed.”

As you can see above, depending on the constant, “-ed” is pronounced differently.

That's because not all consonants are treated the same. Consonants can be categorized into two groups: voiced sound and voiceless sound.

In phonetics, voiced means the sound is produced by vibration.

Some sounds are produced by the vibration of your vocal cords.

“-ed” is pronounced as “d” because the last letter preceding “-ed” is one of these sounds.

In contrast, the voiceless sounds are produced without the vibration of your vocal cords. There is no friction of the air in your throat when you make these sounds.

Some of the voiceless sounds are k, p, sh, and ch. These sounds are made by changing your tongue or lip placements, but they are not made from your throat.

“-ed” is pronounced as “t” when the last letter before “-ed” is a voiceless sound.

Is it Voiced or Voiceless?

Place your hand on your throat and pronounce a prolonged letter “m,” as in “mmm….”

You'll feel the vibration in your throat when you say, “m” but not “s.”

That's how you can find out if a sound is voiced or voiceless.

Generally, do not pronounce the vowel sound “e” in “-ed.”

“She will be loved”

It should not be pronounced as “lovéd.” Actually, there's a special case when “loved” is pronounced like “lovéd” especially in poems.

For past tense verbs ending in “t” or “d,” the pronunciation of “-ed” will always be “id.” There's actually a vowel sound that's pronounced fast and quietly.

This happens not because of voiced or voiceless sounds, but simply because of the finishing letter of “t” or “d.”

“She visited her parents.”

The verb “study” finishes in “d.” It'll sound like “studid.”

Now you know how to pronounce the words ending in “-ed.”

Repeat often so you get used to it. Eventually, you will have no trouble saying these words properly.