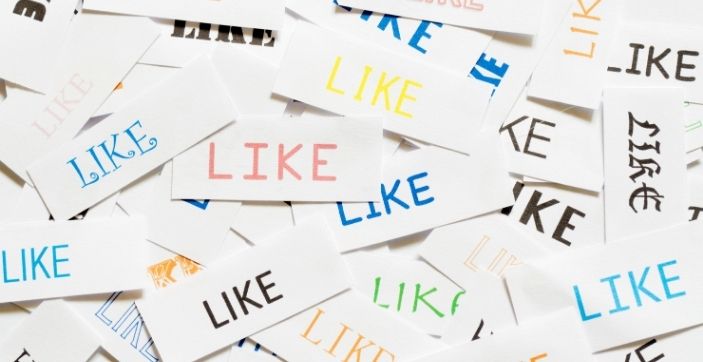 Have you noticed that some native speakers use the word “like” way too much when speaking?

“Like” is a word that has lots of meanings, but these are rarely taught to English language learners.

Next time you watch a movie or TV episode in English, see if you can notice how often they use the word “like.”

In this blog post, we’ll look at some common uses of the word like and some examples.

Some native speakers use “like” a lot when speaking. In this case, “like” is just a filler word!

A filler word has no meaning on its own. It’s something we just say to connect the speech. We might also say it when we’re thinking while talking.

“Like” can also be followed by the verb, either in the gerund form (I like eating chocolate) or in the infinitive (I like to swim). Both ways are fine.

Here, like means roughly or approximately. It’s not exactly three kilometers away, but around that.

A second common use of the word like is in reported speech.

She said she went to the park, and a dog chased her. He replied that must have been scary.

That is an example of a reported speech. You’re quoting someone.

But in a conversation, you’d be more likely to hear native speakers say:

This is the same as:

She said, “I went to the park, and a dog chased me.” He replied, “That must have been so scary!”

The reporting verb “said” has been replaced with “like.”

This is a very common use. You wouldn’t use it in writing, but in casual speech, it’s perfectly fine.

Remember at the beginning of this post, “like” is a filler word? At the same time, it can be used to convey uncertainty. Take a look at the following:

I was, like, going to ring the doctor, and then I didn’t.

Here, “like” is used to make the sentence a little less certain.

It makes the sentence less forceful and a little more casual. You can certainly say the sentence without “like” and covey the same thing.

I was, like, going to ring the doctor, and I didn’t. I was thinking, like, what if there was a long wait. I knew I didn’t, like, have the time.

Once again, you might hear native speakers use “like” a lot as a filler word. It’s not recommended to use “like” in this matter too much because it could annoy the listener and make you come across as unsure or even unintelligent.

In general, if you want to appear more confident and professional, you’d want to minimize the use of filler words in your speech.

Using “like” may make the speaker sound a bit more unsure about what they’re saying.

See how many times you can hear the word “like” used in a movie or drama. You’ll most likely find out that a lot of teenagers and young people tend to use “like” as a filler.

Also, try to pay attention to what effect it has on someone’s speech. Remember, we don’t use the word “like” as a filler in writing as much as we use it in speech.