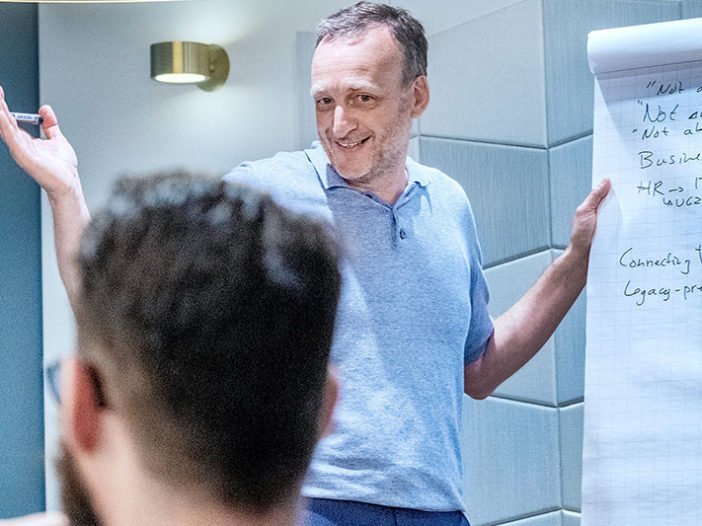 So you want to improve your accent? Don’t ask any run-of-the-mill English teachers for help.

Okay, that was a bit harsh. But here’s the thing.

When you have a problem with your skin, you go to a dermatologist (skin doctor). You don’t just go to any doctor.

Similarly, if you want to improve the way you sound when speaking in English, seek help from someone who specializes in pronunciation training and accent reduction.

If you just go to any random English teacher, you might not be able to achieve the desired results fast.

You’ve probably heard of this generic advice when it comes to speaking English.

“Practice more!” “Say it out loud!” “Exaggerate when you speak!”

Why? Because they lack specificity.

Then who has experience in pronunciation and accent training? You might ask.

Interestingly, there are people with professions whose job performance depends on the ability to change and adapt their accent.

Namely, they are singers, actors and reporters.

It’s part of their job to master the accent and enunciation. They have to learn how to maneuver their mouth, tongue and vocal cords in order to produce the voice they want to achieve.

Interestingly, some popular online English teachers, like Rachel, come from a musical background.

Your mouth is like a musical instrument. The slight change in the placement of your tongue or lip shape produces a different, unique timbre of sound.

Have you noticed how some people speak excellent English, but you could tell that they are not native speakers by their accent?

The subtle difference in the way they pronounce vowels and consonants is what makes them uniquely different from native speakers.

Even within an English speaking country, people pronounce the same words very differently depending on which region of the country they are from. You can tell where people are from by listening to the way they speak.

Not just native speakers, but people in general adopt the accent they inherited from their parents or the community they are in. People are often unaware of how they adopted and developed their accent, and will never think twice about it as long as they are not having any trouble with communication.

But for English-as-a-second-language learners, it’s different.

Learning to speak with a near-native accent means you are learning to shape your mouth, tongue and lips very differently from the way you’re used to in your first language.

It's akin to learning to sing and dancing. Altering your accent and pronunciation has a lot more to do with your physicality!

That is why just repeating after the teacher does not work. If a sound doesn't exist in your native language, you often can't recognize it in the second language.

What to do instead? Change the way you use your body and learning to use your muscles — your mouth and vocal muscles!

One of the readers of this blog said he was mistaken as a person with a disability because of his accent coupled with his natural stutter. He was asked whether something is wrong with him, and whether he’s accompanied by a family member. He is totally normal! It is unfortunate that he was seen that way in that moment when he just happened to not speak clearly.

That was a unique case. But some of you reading this might have had someone say this to you while you lived in an English-speaking country.

“How long have you lived in this country? Your English is really good.”

This is a compliment. But if you’ve been living in an English-speaking country FOR A LONG TIME, this well-meaning phrase stings you. It gives you an embarrassing, crippling feeling.

That’s certainly how one of our readers felt. She has lived in the US for 10+ years, and yet she gets comments like that. She’s been living in the US since she was a teen, and she considers the US to be her home and has completely adopted the American culture — more than the culture of the country where her parents immigrated from.

Whatever your situation is right now, don’t be too discouraged!

The first step is to notice where you are right now, and have an idea of where you want to be.

Then seek the right advice from the right person in order to transform yourself.

So if you want to improve your pronunciation and accent, get coaching from a trained teacher.