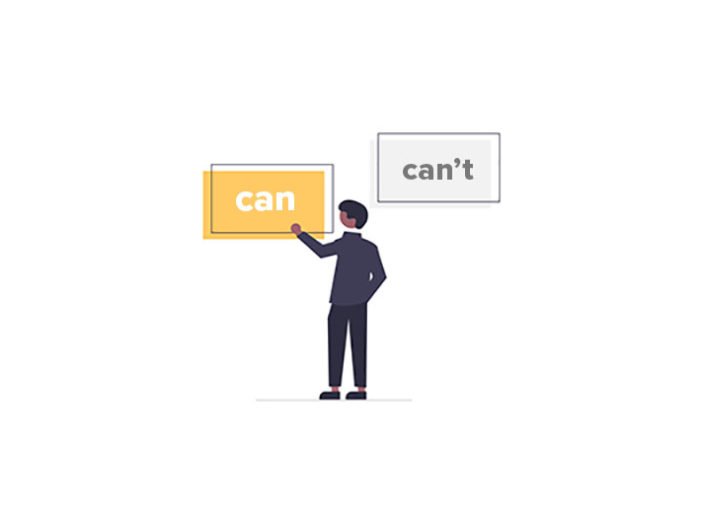 Can you hear the difference between “can” and “can’t”?

Many ESL learners struggle hearing the difference between “can” and “can’t,” especially when someone is speaking fast.

Playback the audio and guess if they’re saying “can” or “can’t.”

Why it’s Hard to Hear “Can” and “Can’t” Clearly

One of the reasons why it’s difficult to differentiate between “can” and “can’t” is because sometimes you can’t hear the last “t” in “can’t” clearly.

In fact, there are many words in English where some consonants “disappear” when they are spoken fast.

They are spoken so quickly and quietly that you almost cannot hear.

Hearing the Difference Between “Can” and “Can’t”

Even if you can’t clearly hear the difference between “can” and “can’t” within a sentence, there are two ways to know which one is being said.

One is paying attention to the accent. The other is understanding the context.

When spoken in long sentences, “can” and “can’t” get a different degree of emphasis.

Let’s look at the example.

① “John never said he can help you with algebra.”

Listen to the recording. Which words are getting an emphasis in this sentence?

① “John never said he can help you with algebra.”

The bold letters are stressed.

If you listen carefully, “can” is not stressed. It’s spoken quickly.

How about this one?

② “John never said he can’t help you with algebra.”

Can you tell which words are being stressed?

② “John never said he can’t help you with algebra.”

The vowel “a” in “can’t” is stressed. It sounds longer. It's more extended than the vowel in “can.”

“Can’t” sounds longer than “can” when spoken in a sentence.

Another way to distinguish “can” and “can’t” when you can’t hear the “t” clearly, is to understand from the context.

“I asked John if he is coming to the party, and he said he can’t because he has to study for a test.”

Is John coming to the party?

How can you tell?

You can tell because you heard, “he has to study for a test” which is his reason for not coming to the party.

So even if you couldn’t hear “can’t” clearly, you can still understand what’s going on by listening to the other parts of the sentence.

Now you know the trick to hear the difference between “can” and “can’t.”

One way is to understand from the context.

The other way is to hear the difference in the way words are naturally emphasized in a sentence.

You might need to train your ears to hear the differences.

But eventually with enough practice, you’ll get to the level where you can just “feel” English.

Native speakers don’t take a moment to analyze which words are being stressed. They just hear them, and instantly draw a meaning.